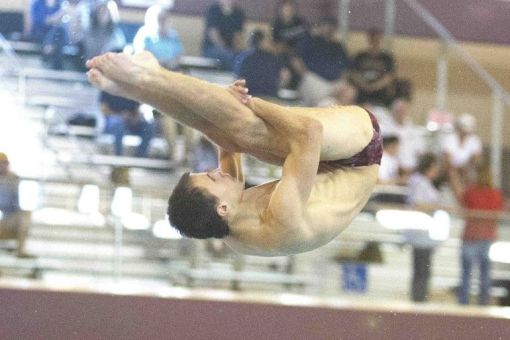 Oak Ridge’s Anton Hoherz dives during the boys 1-meter diving event at the UIL Region IV-6A Championships on Saturday. Hoherz placed first in the event, and will compete next at the state championships on Feb. 20-21. 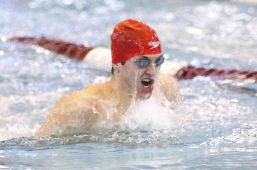 The Woodlands’ Ryan Sorensen competes in the boys 100-yard breaststroke at the UIL Region IV-6A Championships on Saturday. Sorensen placed first, helping the Highlanders pick up its two wins during the meet. 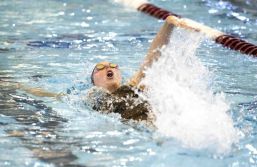 The Woodlands’ Lucie Nordmann swimming during the 100-yard backstroke at the UIL Region IV-6A Championships on Saturday. Nordmann set a new school record, and placed first in the competition during the event.

The day started off slow for area schools, but finished with a flourish, as Oak Ridge, The Woodlands, and College Park all raked in wins during the UIL Region IV-6A Swimming and Diving Championships at Conroe ISD Natatorium.

Official results will not be released by the UIL until Tuesday, including the names of swimmers and teams who will be going to the state finals at the Lee & Joe Jamail Texas Swim Center in Austin, Feb. 20-21.

College Park was the first school to get on the podium as a winner after Cavalier swimmer Dorothy Halmy finished the 500-yard freestyle in a time of 4 minutes, 50.77 seconds, besting her preliminary time from the day before by nearly nine seconds.

Not to be outdone by its crosstown rival, The Woodlands quickly posted a record-setting performance in the girls 100-yard backstroke, courtesy of Lucie Nordmann’s time of 53.44. click here for complete story