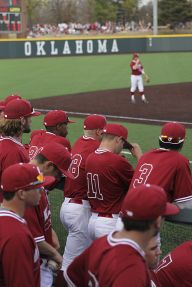 Oklahoma snapped its three game losing streak Tuesday with a 3-0 victory over the University of Central Arkansas in Norman.

The Sooners were led by freshman right hander Chris Andritsos, who had a strong midweek outing for the second week in a row. The Woodlands, Texas native tossed seven innings of one hit ball, striking out six and walking just one. Andritsos’ second career start lowered his ERA to .75. click here for complete story